David Schiff has received a commission for a new clarinet concerto from Chamber Music Northwest and its director, clarinetist David Shifrin.  Written in the style of a Baroque aria, it will premiere this July 6th at the Chamber Music Northwest Festival in Portland. Contemporaneously, the composer’s retirement from Reed College was celebrated over the course of a three-concert retrospective of his music held in his honor this Spring.  Described by Schiff as, “a combination of pieces I wanted to hear again and people I wanted to work with again,” the concert series puts a brilliant capstone on the career of Oregon’s best-known composer. 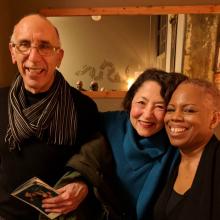 David Schiff celebrates retirement from reaching with a three-concert series of his music, and legendary jazz violinst Regina Carter, accompanied by the Chicago Sinfonietta, will perform his jazz and pop infused violin concerto which pays tribute to four iconic African American vocalists.

David Schiff's suite of four pieces by Duke Ellington entitled DUCAL SUITE was dedicated to and premiered by David Shifrin and the Dover String Quartet on July 26, 2017, presented by Chamber Music Northwest. Schiff's arrangement for clarinet and string quartet is a sophisticated urban cocktail.