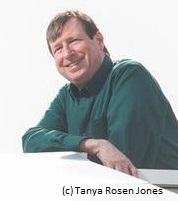 The Riverside Symphony and pianist Xak Bjerken, under the baton of George Rothman, gave the New York premiere of Stephen Hartke's Concerto for Piano and 20 players, Ship of State, on 11/16/2018, the fourth performance since the World Premiere. On December 12, 2018, his cello concerto Da Pacem received its premiere at Oberlin under the baton of Robert Spano with cellist Darrett Adkins. This issue includes these and other recent highlights for the composer.

Ship of State program notes describe the work as a one-movement chamber concerto in four sections, each bearing headings from Henry Wadsworth Longfellow's poem "The Building of the Ship."  The poem is a culmination on the metaphorical comparison of the perils and tribulations of government to that of a ship at sea in a storm. Music Reviewer Anothony Tommasini of The New York Times praised the piece as "excitingly frenetic ...on the divide between vibrant jazz riffs and stern pointillist strands. Mr. Hartke wrote the piece for pianist Xak Bjerken, who played it dazzlingly." Read the full review.

Da Pacem was commissioned by Oberlin College and Conservatory, the Saint Paul Chamber Orchestra, the Aspen Music Festival, and the American Composers Orchestra. Its world premiere featured two VIP Oberlin alumni - Atlanta Symphony music director Robert Spano and cellist Darrett Adkins. The work takes its title from a Latin hymn that begins “Grant peace in our day.”  It is a reflection on these unsettled and unsettling times.  As the concerto’s protagonist, the solo cellist journeys through a considerable variety of musical landscapes. Read the Cleveland Classical interview with Hartke here.

January 13: Blessed Are They Who Sow and Shall Not Reap - Oberlin Chorus