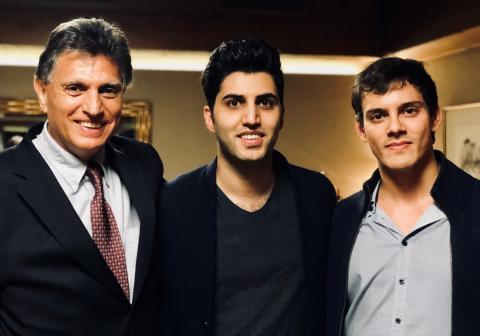 Reza Vali's new orchestral work Isfahan (Calligraphy No. 16) was commissioned and premiered by the Pittsburgh Symphony Orchestra on June 8-10, 2018.  The piece was commissioned as a celebration of maestro Manfred Honeck's ten years with the orchestra, and it premiered under his baton.

Persian Folk Songs (Set No. 16C) was commissioned by Kian Soltani and is dedicated to him.  The work, which premiered on May 10 of 2017 at the Pierre Boulez Hall in Berlin by Kian Soltani and Aaron Pilsan, was recorded by the two artists and released in March of 2018 by Deutsche Grammophon.  The piece had several European performances since the premiere, including in Austria, the Netherlands, Germany, and Belgium.  A performance in London will take place on April 12 of this year.

Carpe Diem String Quartet has been performing, premiering and recording much of Reza Vali's work.  They premiered his String Quartet No. 4 (Ormavi) at the Bennington Chamber Music Conference in Bennington, Vermont on August 4, 2018.  They performed his work Ashoob (Calligraphy No. 14) on January 6, 2019 at the Carnegie Hall's Weill Recital Hall.  And several of Reza's chamber compositions were performed by Carpe Diem String Quartet, with Dariush Saghafi, santoor (Persian hammer dulcimer), and David Korevaar, piano, for a recording that will be released in 2019.

Cuatro Puntos Ensemble and Dariush Saghafi, santoor, will be performing Reza Vali's works Ashoob (Calligraphy No. 14) and String Quartet No. 4 (Ormavi)" on April 12 - 14 in Hartford, Connecticut.

This summer, Reza Vali will be Composer-in-Residence at the Academia Musicale Chigiana in Siena, Italy, on June 9 - 28, 2019.  We will also be offering composition masterclasses in Austria on April 30 - May 7, 2019.

Vali's The Darkness of Fury was performed twice in 2018: once with the Kharkiv Philharmonic Orchestra in Ukraine (5/25/2018) under Mehdi Javanfar and once by the Montgomery Philharmonic (10/7/2018) under Sandra M. Ragusa.

To inquire after these works or any other, please contact Lauren Keiser Music, publisher.