Meira Warshauer's "Call of the Cicadas" Calls for Eco-Awareness 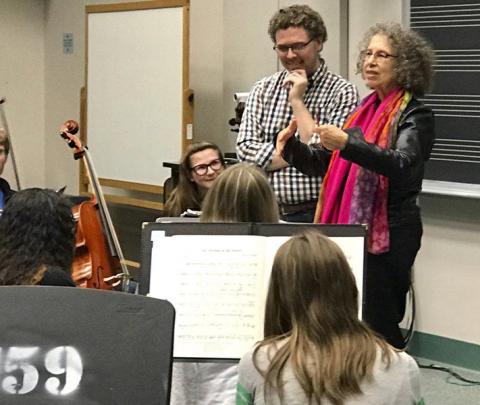 Meira Warshauer was invited to serve as the sixth composer to work with young musicians (grades fifth through twelfth) at the Linda Luebke String Festival at Indiana State University on September 28 - 30.  This annual festival calls on a single composer to write a piece of string orchetra music to be performed at the end of the event.  The title of the new composition is called Dancing by the Sea.

While at the festival, Meira also took the opportunity to work with the students of Indiana State University who performed Like Streams in the Desert on September 29, 2018.

When Meira originally wrote her Symphony No. 1: Living, Breathing Earth, it was meant as a call to greater environmental awareness and love of the Earth.  She has since taken the first movement and made it an independent piece of music titled Call of the Cicadas.  The message remains the same, and this shorter excerpt from the larger work allows for more flexible programming.  It is a wonderful edition to any Earth Day or Arbor Day themed concert.