At the Leading 'Edge' - Donald Crockett New Works and Performances 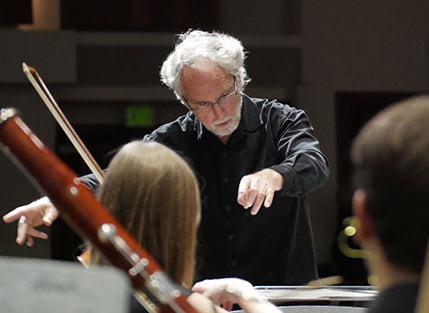 Los Angeles-based composer and conductor Donald Crockett has long been at the forefront of American chamber music. It is apparent that Crockett remains a leading force in new music as both champion and creator, as we explore his new works and performances in this issue.

Two of Crockett's new string quartets both received premieres last season. STRING QUARTET NO. 3: "CORTEGE", commissioned by the Dilijan Chamber Music Series in Los Angeles, premiered October 16, 2016. His STRING QUARTET NO. 4, subtitled "TRAVELLING SYMPHONY," was commissioned by the Caramoor Music Festival in New York and received its premiere on July 14, 2017 by the Argus Quartet at the Caramoor Festival.

Donald Crockett's CAPRICCIO II for two pianos was composed for the HOCKET duo, with pianists Sarah Gibson and Thomas Kotcheff. Performances were given by the pair in 2017 at UCLA on February 27, Webster University St. Louis on March 9, and at University of Georgia on March 16.  A version of the piece with chamber orchestra,  a co-commission with Kaleidoscope Chamber Orchestra, Aspen Music Festival and the Oberlin Sinfonietta will receive its world premiere performances with Kaleidoscope on May 12-13, 2018, at Oberlin in Fall 2018, and then with the Aspen Contemporary Ensemble at the Aspen Music Festival in summer 2019. For more information, please contact our rental department.

Donald Crockett returns for his third summer as a resident conductor of the Aspen Contemporary Ensemble (ACE) at the Aspen Music Festival in Summer 2018, where he will conduct new works each week in the festival's chamber music series.  On July 8, 2017  Crockett conducted WHISTLING IN THE DARK, both Aspen Music Festival premieres, together with works by Pierre Boulez, Julian Anderson, Timo Andres, Lee Hyla and others.

For more information about Donald Crockett and his work, visit our composer's page.