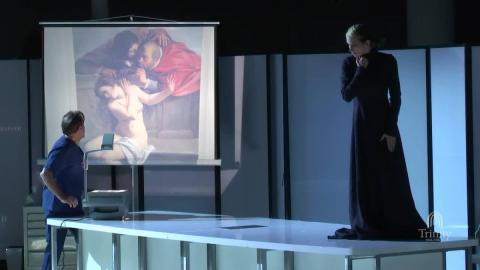 Time’s Arrow Festival of New York presented a partly-staged premiere of Laura Schwendinger’s new opera, Artemisia.   The New York Times review stated: "Artemisia…fits in big themes set to music of quivering intensity…idea and form, image and projection, sight and gaze also find nuanced and intelligent treatment." The Left Coast Chamber Ensemble of San Francisco premieres the complete, fully-staged opera on June 1st and 2nd of this year. Video and more about the opera are featured in this story.

The Story
Artemisia is an opera of passion, betrayal, and art in 17th Century Italy based upon the life of famed painter Artemisia Gentileschi (1593 - c.1656). Gentileschi was born in Rome as the daughter of a painter and achieved her own renown in an era when women painters were not accepted by patrons. She was the first woman to become a member of the Accademia di Arte del Disegno in Florence. Today, she is regarded as one of the most advanced painters of her time.

Gentileschi was raped by her teacher when she was a teenager. At a court trial, her assailant was convicted, but only after she had been subjected to torture to verify her testimony. She went on to attract the attention of Cosimo II de’ Medici, befriended Galileo Galilei and worked in London at the invitation of King Charles I. Artemisia’s libretto uses excerpts from the actual rape trial and the letters the artist wrote about her art, life and her friendship with Galileo, all as she slowly loses her hearing. The story of Gentileschi’s rape is blended with her compassionate painting of the biblical character Susanna, who was ogled and shamed in her bath. With projected images that come to life, the opera tackles Artemisia’s struggles and triumphs as she battles inequality and reveals hidden stories.

This is the Ring You Gave Me (Torture of Artemisia)