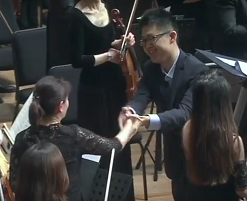 Peng-Peng Gong's Symphony No. 10: Peking Fantasy, will receive its U.S. Premiere on January 29 with a joint Chinese New Year concert featuring The Philadelphia Orchestra led by Kensho Watanabe, side by side with the Shanghai Philharmonic, Liang Zhang conductor, at Kimmel Hall.

The World Premiere took place in China, performed by The Shanghai Philharmonic conducted by Liang Zhang on April 28, 2018. A live stream video of the performance was produced by the Vienna State Opera's webcasting team. This US Premiere in Philadelphia also carries an important historical and diplomatic significance, as it celebrates the 40th Anniversary of official US relations with the Communist government of China.

The work is a grand orchestral homage to Peking Opera, the crowning heritage of traditional Chinese performing arts. The music aims to "translate" the emotional and philosophical experiences of the art form into Western orchestral terms, merging raw materials from traditional masterpieces in a heavy, virtuosic and post-romantic tone. The symphony is divided into two halves separated by an intermission.

Gong's Tenth Symphony was jointly commissioned by the Shanghai Symphony and the Philadelphia Orchestra.