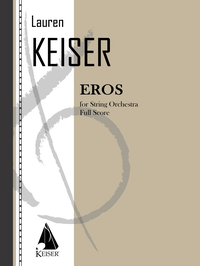 Price:
$24.95
Order Here
Duration (minutes):
14
Detailed Instrumentation:
String Orchestra
Eros was given its world premiere in Moscow, Russia in the Hall of Composers at the XXIX Annual Fall Moscow New Music Festival sponsored by the Union of Russian Composers. It was the first American work to be premiered at the Festival in over two decades. In the following years, Eros has been presented by the Union of Ukrainian Composers at their Kiev International New Music Festival and by other orchestras in Russia and Ukraine.

This score is the first publication of the revised composition. The composer rewrote twenty-one seconds of music in the first movement, “Song” which is in this score.  The work was dedicated to Krzysztof Penderecki and  presented to him on the occasion of his 75th birthday. Parts available on rental from the publisher.