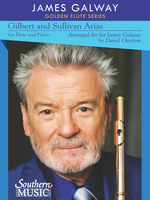 Arias for Flute and Piano

The Gilbert and Sullivan arrangements are divided into separate albums, as some of the songs are best suited to solo flute and piano, some for two flutes and piano, and some lend themselves to a flute choir.

This volume for flute and piano contains:
• A wand’ring minstrel l (Mikado)
• ""On a tree by a river  (Mikado)""
• Poor wand’ring one (Pirates)
• ""Take a pair of sparkling eyes  (Gondoliers)""
• The flowers that bloom in the spring (Mikado)
• The sun whose rays (Mikado)
• When a merry maid marries (Gondoliers)
Downloads:
Closer Look sample pages (Excerpt)