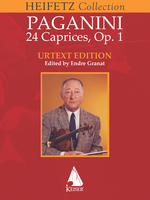 Price:
$19.95
Order Here
Detailed Instrumentation:
Violin Solo
Since their first publication by Ricordi in 1820, Paganini's Caprices Op. 1 have been sources of inspiration for many great violinists and composers. They have no equal, “either in beauty, originality or difficulty of performance” remarked the great violinist Ole Bull.
However, early editions on which most modern publications are based, contain many errors as they were not proof read by the composer nor with his manuscript. Even since 1974 when the manuscript was finally published, misprints persisted in virtually every edition, forcing players to rely on two or more editions.
This was necessary to have both accurate notation that was more in line with Paganini's original intentions (Urtext editions) as well as useful technical markings such as fingerings and bowings later added by generations of master violinist. These "practical editions" however still contained many of the inconsistencies that were first introduced in the first and second printings.
Now nearly two centuries later, this edition finally offers violinists the best of both worlds, uniting a newly-engraved Urtext violin part edited by Endre Granat, with expert bowings and fingerings as practiced and taught by legendary violinist and Granat's mentor, Jascha Heifetz.
Downloads:
Closer Look sample pages (Excerpt)