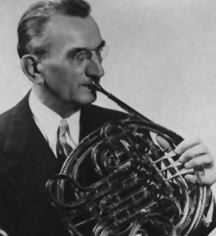 Visit website
Pottag was born in Forst, Germany in 1876. He started music with a toy violin at age five and the accordion at seven. He took up trumpet at 14, playing in the city band as an apprentice and changing to horn after a year. At 19, he joined the band of the German Navy in Wilhelmshaven and traveled extensively with Kaiser Wilhelm on his private yacht.

In 1899, Pottag entered the Leipzig Conservatory as a scholarship student, studying with Friedrich Gumpert, and graduated with honors in 1901. He played first horn with the Hamburg Symphony for a short time before emigrating to the US.

Pottag wrote and arranged music for the horn throughout his life. His three volumes of excerpts were one of the first compilations of the standard orchestral horn passages in the US, an invaluable aid to generations of horn students. His publications also include daily exercises, a method book with Nilo Hovey, and numerous arrangements for horn and horn ensemble.
Back to all composers