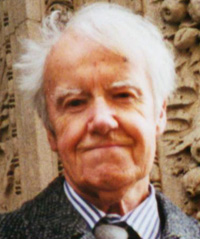 Born in Princeton, Illinois, he has lived in Wyoming, Missouri, Pennsylvania, New York, New Jersey and Vermont. After his graduation from Carthage College and receiving a scholarship to the Curtis Institute of Music in Philadelphia, Uber served four years in the United States Navy Band and then continued his studies at Columbia University where he obtained his Master of Arts and Doctor of Education degrees.
Dr. Uber was professor of music at the College of New Jersey (formerly known as Trenton State College) for thirty-three years and was recently awarded the title of Emeritus Professor of Music by that institution. In May 1999, he was awarded an honorary Doctorate of Music by Carthage College. He has been a member of the faculty at the Westminster Choir College in Princeton, New Jersey and the National Music Camp, Interlochen, Michigan where he was the Director of Ensemble Music. He also served as director of the Princeton University Symphonic Band for ten years.
As a performing artist, Dr. Uber played first chair trombone with the New York City Ballet Orchestra at Lincoln Center, the New York City Opera Orchestra and the NBC Symphony Orchestra (later known as the Symphony of the Air). For many years he was solo trombonist with the NBC Television Opera, the Columbia Recording Symphony, the New York Brass Quintet and the Contemporary Brass Quintet. His artistry may be heard on countless record albums under such eminent conductors as Igor Stravinsky, Leopold Stokowski, Sir Thomas Beecham, Leonard Bernstein, Aaron Copland, Morton Gould, Arthur Fiedler, Robert Irving, Fritz Reiner, Robert Russell Bennett, Arthur Weisberg, Bruno Walter and Igor Markevich.
Solo works have been commissioned by such famous artists as Harvey Phillips, Don Butterfield, Frank Meredith, John Swallow, Robert Nagel, Dr. Harold Krueger, Wayne Andre, Gerard Schwarz and Lucas Spiros.
Uber has appeared as adjudicator at Dartmouth College and Castleton State College and as a lecturer-clinician with Robert King Music Sales.
Back to all composers